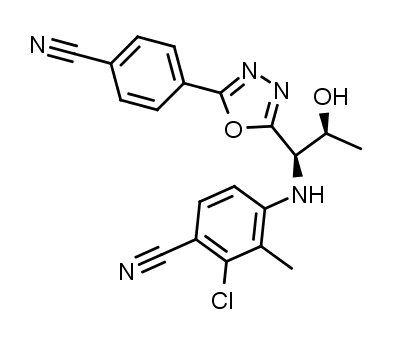 RAD140, sometimes referred to as Testolone, is a nonsteroidal selective androgen receptor modulator (SARM) developed by Radius Pharmaceuticals, Inc., later to be licensed to Ellipses Pharmaceuticals in 2020. RAD140 was primarily developed for the treatment of muscle-wasting (cachexia) and osteoporosis, the weakening of bones with age. It has also demonstrated its potential to be an effective treatment for estrogen receptor positive (ER+) breast cancer [1].

RAD140 has primarily been used in preclinical trials (animal-only models) for the entirety of its existence; limiting the applicability of the data we can work with.

But this changed in October of 2017, when the first Phase I trial for RAD140 in ER+ breast cancer was initiated. This granted the opportunity for researchers to assess the safety profile, tolerability, and metabolic processes associated with the treatment of RAD140, in addition to any possible toxicity and/or adverse events.

SARMs should optimally err towards muscle and bone as opposed to the prostate relative to testosterone/androgen-treatment. Development of a compound that has high affinity for the AR while also demonstrating high levels of efficacy for oral administration and having favorable amounts of tolerability is no easy task.

Fortunately, RAD140 appears to possess these aforementioned qualities from the preclinical data that we have available to us.

Up until the 1970s, breast cancer was often treated with various derivatives of anabolic-androgenic steroids (AAS) and danazol, the latter of which is a weak AAS with antiestrogenic properties that was commonplace in breast cancer treatment [2]. Only 20-25% of patients showed significant reductions in tumor growth utilizing these treatments [3].

Use of these androgen-based therapies declined after it was discovered they commonly caused virilizing (masculinization) effects. In addition, these treatments also carried with it a high risk of increasing the conversion rate of androgens to estrogens, otherwise known as aromatization.

As the AR is expressed in ~90% of ER+ breast cancer cases, this demanded a new generation of pharmaceuticals. These pharmaceuticals were to optimally have a greater binding affinity (strength) and selectivity for the AR. This would hypothetically grant better response rates from patients, while at the same time, drastically reducing the incidence of adverse events.

This is where RAD140 came into the breast cancer treatment picture; having demonstrated high levels of efficacy in AR/ER+ breast cancer cell models [1].

The level of success demonstrated by RAD140s preclinical trial performance led Radius Pharmaceuticals to initiate the first-ever human trial on RAD140s effects on ER+ breast cancer [4]. There were 16 total patients enrolled in the trial who were 58 years of age on average. This study was defined as a “dose-escalation” study, meaning that its purpose was to clinically establish at what dose that RAD140 would prove to be most effective with the least amount of adverse effects. This is otherwise known as the minimum effective dose (MED).

The doses that were provided were in increments of 50mg/day, 100mg/day, or 150mg/day. After observation of mild-moderate adverse effects such as elevated liver enzymes and prostate-specific antigen (PSA) levels in the higher dosage groups, researchers deemed the maximum tolerated dose of RAD140 was 100mg/day. It took about 16 weeks of treatment on average to elicit a partial response, which is a term in clinical cancer literature that means a reduction in the size of a tumor or the lessening of the extent of cancer in the patient’s body in general.

RAD140 has been shown to be neuroprotective; a broad term which can be defined as having the ability to stave off neurodegenerative disorders, such as Alzheimer’s Disease (AD), and maintain optimal cognitive functioning.

Normal decreases in testosterone occur as men age, which increases the risk of dysfunction in areas containing high concentrations of ARs, including the brain. In fact, low testosterone is a major risk factor and key contributor to the development of AD [5]. Because of this, androgen therapy has proven to be immensely beneficial to protecting against neurodegenerative decline through numerous mechanisms [6,7].

However, the problem with using androgen therapy for neuroprotective purposes is that it causes an increase in the conversion of testosterone to its more androgenically potent derivative dihydrotestosterone (DHT). The 5ɑ-reductase (5AR) enzyme is what’s responsible for this conversion. 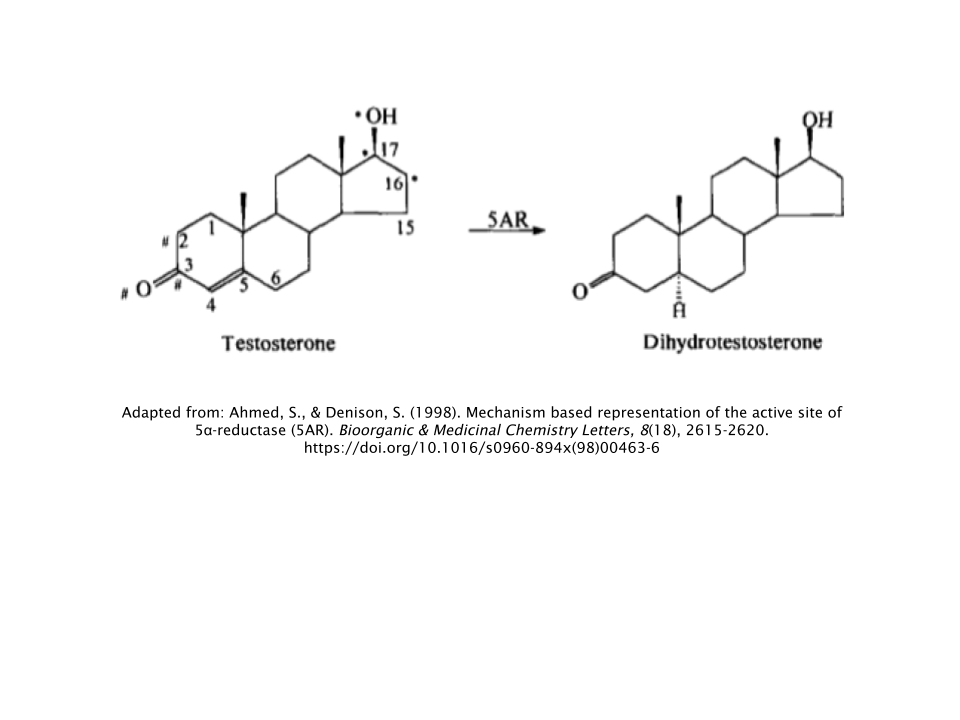 This increases the risk of accelerating the growth of preexisting cancerous tumors on the prostate and the rate of hair loss on the vertex of the scalp (androgenic alopecia), as these locations are where DHT exhibits its most robust androgen signaling at the AR.

Since RAD140 doesn’t exert its effects in problematic areas like the prostate, researchers became interested in its utility to provide neuroprotection for those at risk for developing neurodegenerative disorders. A study reported RAD140s ability to provide neuroprotection both in cell culture and rat models. In testosterone-deficient rats, RAD140 was able to protect neurons of the hippocampus (responsible for learning and memory) while simultaneously inducing significant levels of anabolic activity in both skeletal muscle and bone tissue [9,10].

The levator ani muscle, a group of 3 muscles located within the pelvis, is often used as a measure of anabolic activity in preclinical research involving anabolic/androgenic compounds. Below is an illustration of its anatomy in humans:

The effect of increasing doses of RAD140 on the levator ani and prostate muscles of castrated rats was compared to a castrated control (vehicle), non-castrated control (sham), and testosterone propionate (TP) group [11]. The optimal result in a study like this is that the target tissue (levator ani) would be stimulated and that the prostate would not.

And that’s exactly what happened here, as RAD140 stimulated the levator ani muscle beginning at a dose amount of 0.03mg/kg. The levator ani growth reached an amount equivalent to that of the sham group when the RAD140 group were administered a dose of 0.3mg/kg. 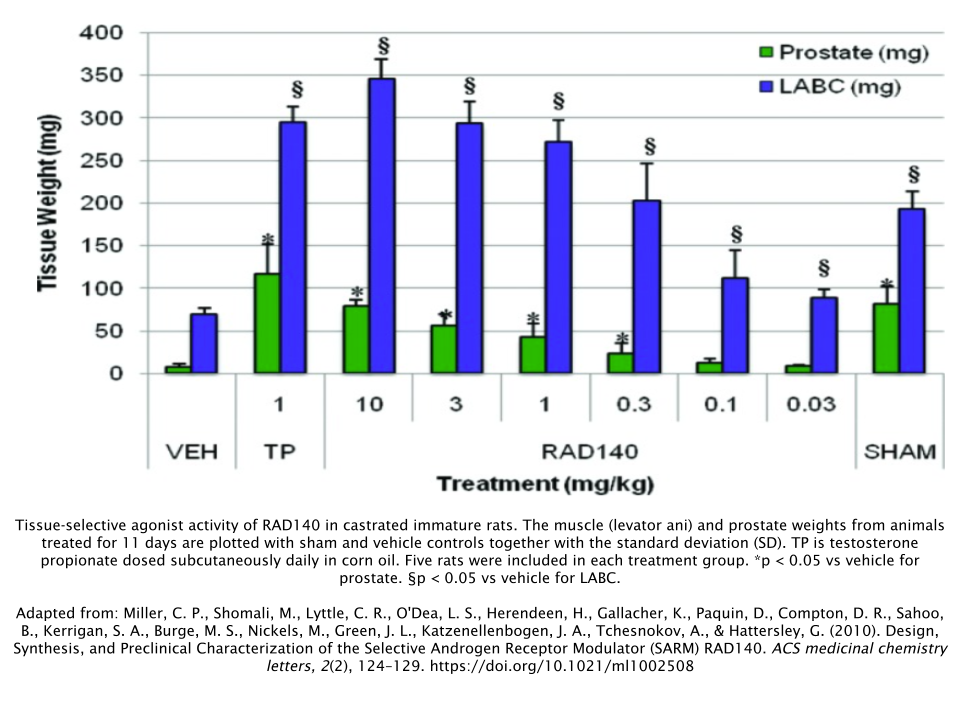 The researchers were constantly observing the fact that RAD140 had failed to stimulate the prostate and seminal vesicles (another non-target tissue) equal to a dose of TP at 1mg/kg. Because of this, they decided to see what effect administering both TP and RAD140 would have.

A high dose of RAD140 (10mg/kg) actually antagonized, or worked against, TP’s undesirable effects on seminal vesicles while simultaneously agonizing, or adding to, the beneficial effect that TP had on the levator ani; thus illustrating the optimal mechanism of action of a SARM. 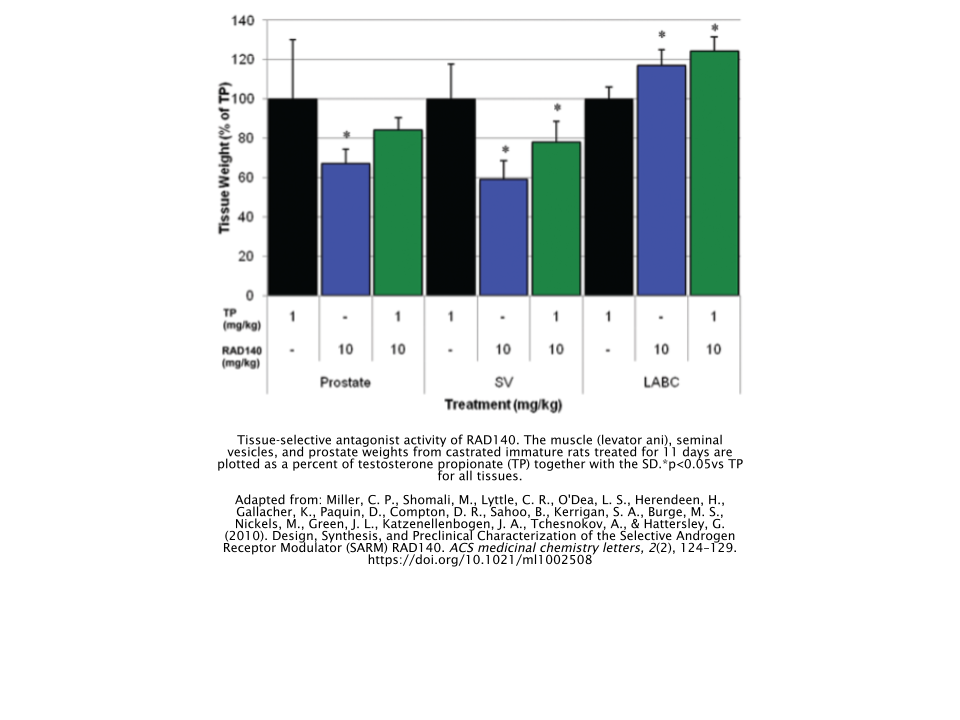 Is RAD140 Better for Bulking or Cutting?

RAD140 is most often used for gaining size and strength when used recreationally. While this doesn’t mean it can’t be used for a cutting cycle, there are better options out there for that purpose, such as S4 (Andarine) or Ostarine (Enobosarm).

RAD140 has also been reported to give users somewhat of a “dry” look to them, which would make for optimal “lean gains” during a bulking cycle or perhaps even make for a solid recomposition cycle.

Recreational users of RAD140 often report using anywhere between 10-30mg/day for 8 weeks, regardless of what their body composition goal(s) are.

How Does RAD140 Compare to Other SARMs?

Unfortunately, there isn’t any data available that directly compares RAD140 to other SARMs. However, using what we know about other SARMs both from preclinical data and anecdotal reports, we’re able to infer how RAD140 may compare performance-wise to other SARMs.

Most who use Ligandrol report it to be most beneficial during their bulking cycles, so it’d make sense to compare these two SARMs together. One could argue that Ligandrol is superior to RAD140 in terms of its muscle-building potential. But since more data is available on Ligandrol compared to RAD140, this argument may be skewed, as we simply don’t have enough evidence to prove such a case. But simply from lurking through anecdotal reports, these two SARMs appear relatively comparable in terms of strength and size gain.

RAD140 has been compared to both S4 and S23 in terms of its ability to create a “dryer” appearance that one would desire when cutting. This is perhaps why people choose to use RAD140 for recomposition phases as well. But it still appears that S4 and S23 are superior for an all-out cutting cycle as opposed to RAD140.

Liver enzymes are often negatively impacted by the ingestion of oral anabolic steroids, such as methandienone, or Dianabol. These types of steroids must undergo a chemical change called 17α-alkylation in order to successfully bypass the liver. This, in turn, can cause liver damage, known as hepatotoxicity [12,13].

RAD140 has perhaps the most impressive and astounding effects on liver profile compared to any other SARM to date. At 10x the established effective dose, researchers did not observe any significant elevations of liver enzymes in a preclinical model [11].

As with every other SARM that has been researched thus far, RAD140 exhibits a dose-dependent lowering of HDL (“good” cholesterol”), so it’s wise not to delve above the unofficial 30mg dosage cap for any lengthy period of time.

RAD140 is perhaps one of the most suppressive SARMs there is. Data conducted on monkeys with moderately high levels of testosterone (equivalent to 600ng/dL in human males between the ages of 25-54) had their testosterone levels lowered to a human equivalent of 200-300ng/dL when administered RAD140 for 28 days [11]. This suppression occurred regardless of the dosage amount, suggesting that RAD140 suppresses testosterone even at very low doses.

It’s recommended that you complete a PCT after a cycle of RAD140. The half-life of RAD140 is 60 hours according to the only clinical trial ever conducted on the SARM [4]. Therefore PCT should begin between 2-3 days after the end of your cycle.

It’s not necessary to include aromatase inhibitors in your PCT. Using a selective estrogen receptor modulator (SERM) should suffice; the two most popular choices being either tamoxifen (Nolvadex®) or clomiphene (Clomid®). While using tamoxifen (Nolvadex®) is recommended due to its milder nature, some prefer the use of clomiphene (Clomid®). Either way, one or the other should be just fine. Rarely is it necessary to take both of these SERMs simultaneously in order to recover properly.

No matter which one you choose, here’s what a simple 4-week PCT protocol would look like for these SERMS: